Deirdre Murphy is a Philadelphia-based painter whose art is constantly evolving while staying grounded in the patterns and perspectives of science and nature. 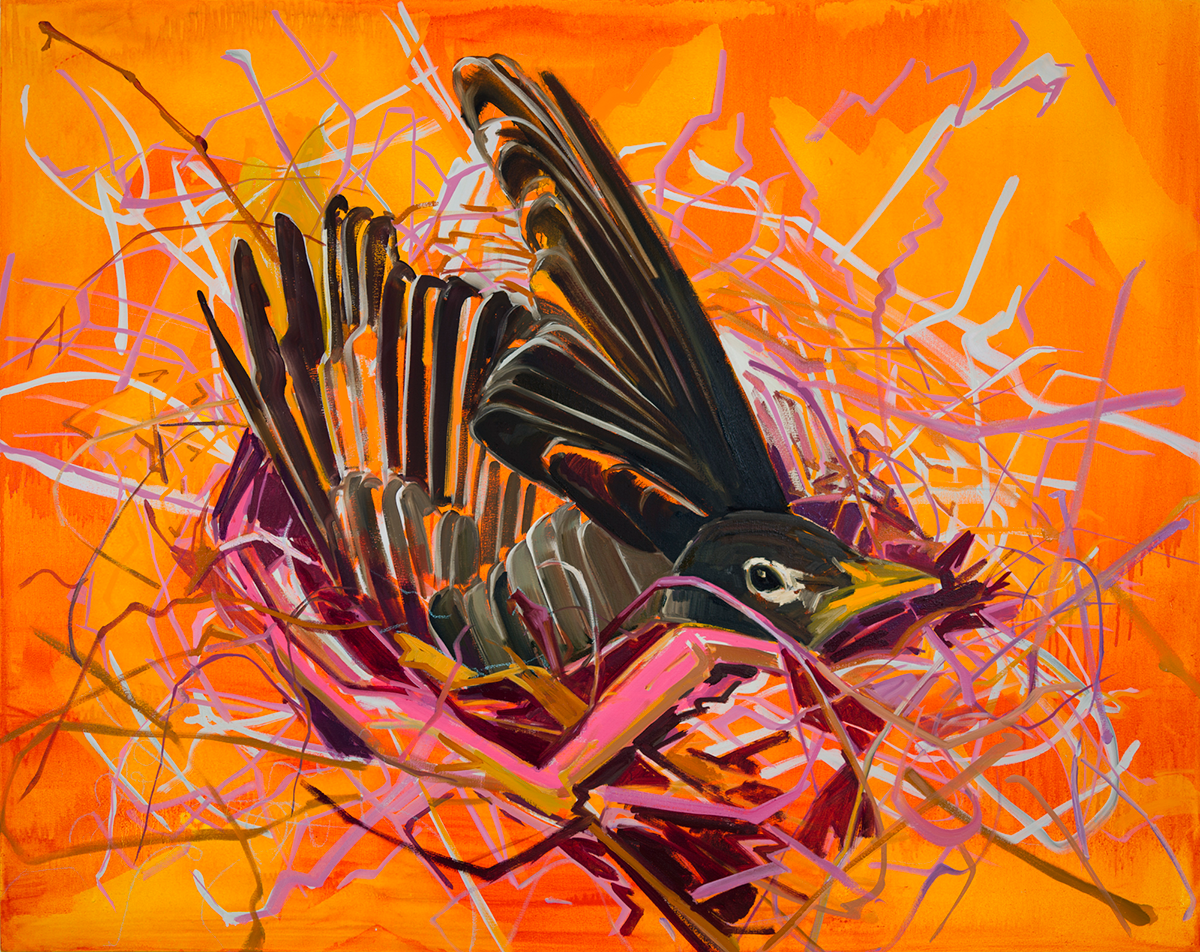 Artists of all stripes try to capture and represent moments that have made an impression on them. These moments might consist of just about any image, sound, current experience or past memory—in fact, the whole range of human experience—and the artist uses their medium of choice to share their interpretation of them with the world. For a painter like Deirdre Murphy, the most important moment is that “light bulb” moment of sudden insight that encourages mindfulness and engenders appreciation.
“I try to paint for that moment in me, and if I can spark that in me, then I think I have a pretty good chance of sparking that in an audience,” says Murphy, teaching assistant professor of art in the Department of Art, Architecture and Design. “I want the work to feel effortless when they look at it, and to have this hit of beauty where it makes them stop in their tracks for a moment. From there I want it to be more than just beauty. I want it to spark this curiosity where they're going to look at it for more than four seconds, which is what the average view time of the Mona Lisa is.”
Murphy believes that too many people don't actually look at a work of art like the Mona Lisa with their naked eye; instead, they hold their cell phone camera up, take a picture of it, and then post the memory of them being there. But they don't have the memory of really seeing it.
“I want them to see something they haven't seen before, or make a connection they haven't made before,” Murphy says. “I want people to just stop and look and observe as carefully as I'm observing nature.”
The overarching theme of Murphy’s oeuvre is not just observing but representing the interconnected patterns that exist in both art and science through the lens of biological patterns and data visualization. While these elements have been present in her artistic consciousness for over 30 years, She has spent the past decade specifically exploring the intersecting topics of avian migratory patterns, the effects of climate change, and molecular biology in her work. These interests have led Murphy to numerous fruitful collaborations with scientists at esteemed institutions such as The University of Pennsylvania, Hawk Mountain Sanctuary in Kempton, PA, the Carnegie Museum of Natural History, Drexel University’s Academy of Natural Science, and Integral Molecular Laboratory in Philadelphia.
A foundation in art and science 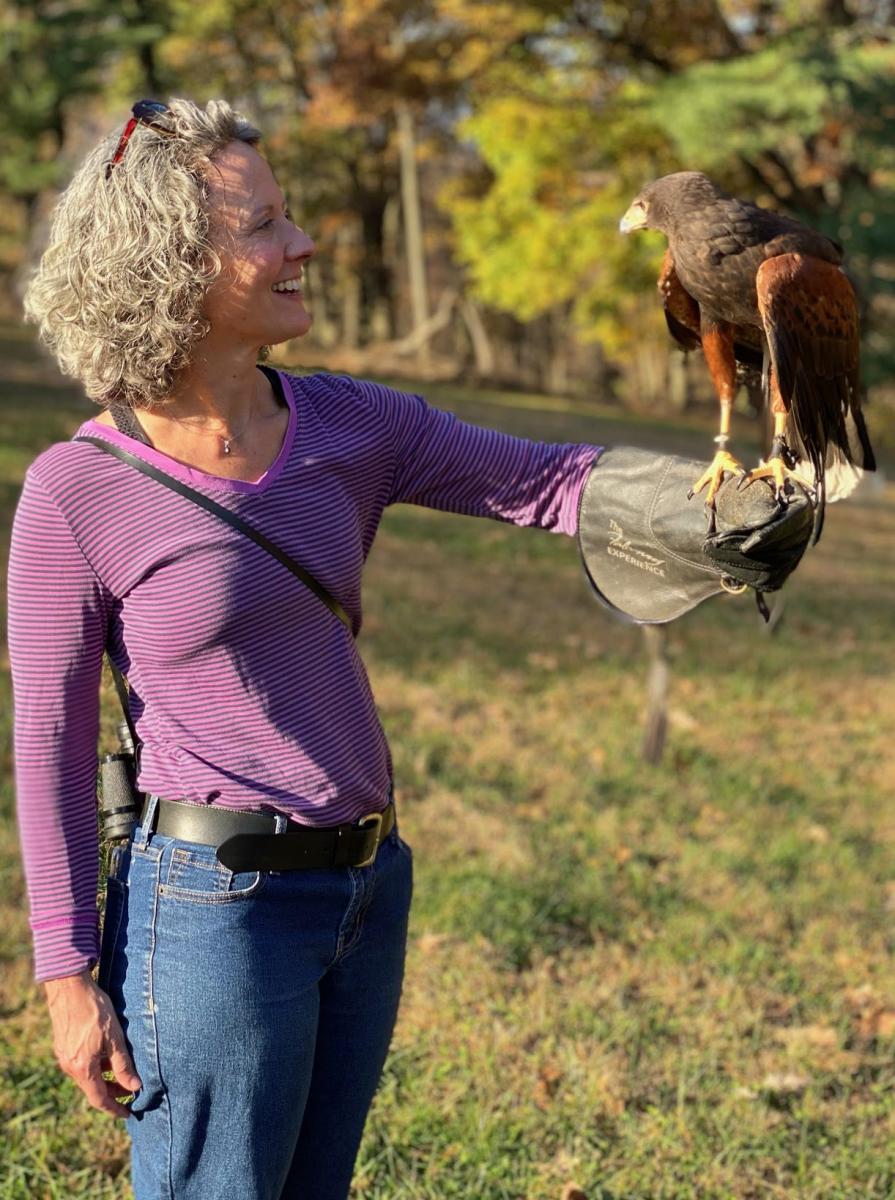 Murphy, who was born in New York City and raised in France, England, Australia and Japan, received her BFA in painting and printmaking from the Kansas City Art Institute in Kansas City, MO and her MFA from the University of Pennsylvania in Philadelphia, PA. She had a predilection for art from an early age—as evidenced by a cherished photograph her parents have of her as a young girl at a little table immersed in the flow of drawing—and that artistic impulse was further nourished by her parents’ vocations and avocations.
“My dad was a scientist—a hematologist oncologist who studied blood—and my mom has her PhD in Irish literature,” she says. “They both had a love of culture, and we lived all over the world; and wherever we lived, we would always go to museums. I was raised in this kind of world where the museum became my cathedral.”
At the time, Murphy didn't realize how instrumental those visits to the local museum—as well as her father’s lab—would be to her work as a painter, but she can see it clearly in hindsight.
“I embrace abstraction in a way that I don't think a representational painter would,” she says. “I grew up looking in the microscope; my dad always had beautiful photos of blood cells and sickle cell anemia—all the things that can go wrong but look really beautiful even though they're diabolical.”
Murphy’s past decade of exploring natural patterns and alternative perspectives in the avian world began when she completed a residency at the Raptor Center at Hawk Mountain Sanctuary in Kempton, PA, followed by one at Powdermill Nature Reserve, which is part of the Carnegie Museum of Natural History in Pittsburgh, PA. Those experiences resulted in her two series of paintings called Murmurations and Winds of Change. The Raptor Center was just finishing a 15-year climate change study, so they were able to share their data with Murphy, who then incorporated them into her paintings as compositional elements.
“That’s when it all started to make sense—that’s what I was seeing in the lab as a little girl,” Murphy says. “And now I'm able to bring these elements of abstract shape, line and form into the work to make paintings I've never seen before, and that challenged me as a maker.”
Additionally, for both Murmurations and Winds of Change, Murphy said she attempted to depict species in crisis through the lens of beauty rather than fear, in the hopes of encouraging the viewer to ponder their own role in our changing evolution.
Nest Alchemy
More recently, Murphy collaborated with professor of biological sciences Jennifer Swann and the Office of Creative Inquiry’s NeuroSalon program to produce her series Nest Alchemy.
“That was during COVID summer,” Murphy says, “so we were each shipped a sheep's brain, and I was able to hand pick my two star art students that had been studying with me and were going on to get their medical illustration degrees in grad school.”
Despite the pandemic, the collaboration was a productive win-win situation all around: Swan was planning on writing a textbook about the neuroanatomy of the brain; Murphy was able to continue her interest in exploring her questions about patterns and perspectives; and the students were preparing a portfolio of work so they could apply to graduate school.
“It was a perfect pairing,” Murphy says. “Dr. Swan would give the neuroanatomy lecture in the morning, and I would give them their art assignment in the afternoon. Then we would critique and give them our direction, as far as color palette or techniques to use.”
The students Murphy chose were Sarrah Hussain, who recently began graduate school in medical and biological illustration at Johns Hopkins School of Medicine, and Viola Yu, who is in the biomedical communications program at the University of Toronto.
“Both of those young women were just remarkable painters and drawers and are going on to have great careers now,” Murphy says.
For Murphy’s part, she was inspired by how the neurons, when they're bunched together, look strikingly similar to bird nests.
“During Covid isolation we were all stuck at home in our nests. While taking quarantine walks, I noticed the nests being built in late spring of 2020, and how strikingly similar they were to neuron structures. That led me to ponder the essence of home as a place of sanctuary and of vulnerability. Nest Alchemy also reflects on climate change, and how mating and breeding seasons are affected by human kinds of impact.”
While her residencies at scientific institutions have been immensely valuable to her growth as an artist, Murphy believes that her teaching at Lehigh helps her evolve as a painter just as much, by allowing her to question and push herself as much as her students.
“I feel like my purpose on this planet is to be a painter and a teacher, and I'm lucky enough to do both of those things,” she says. “Teaching keeps me in the trenches, and I think it's great. The students are so curious and engaged, and I love seeing that light bulb go on when they get it.” 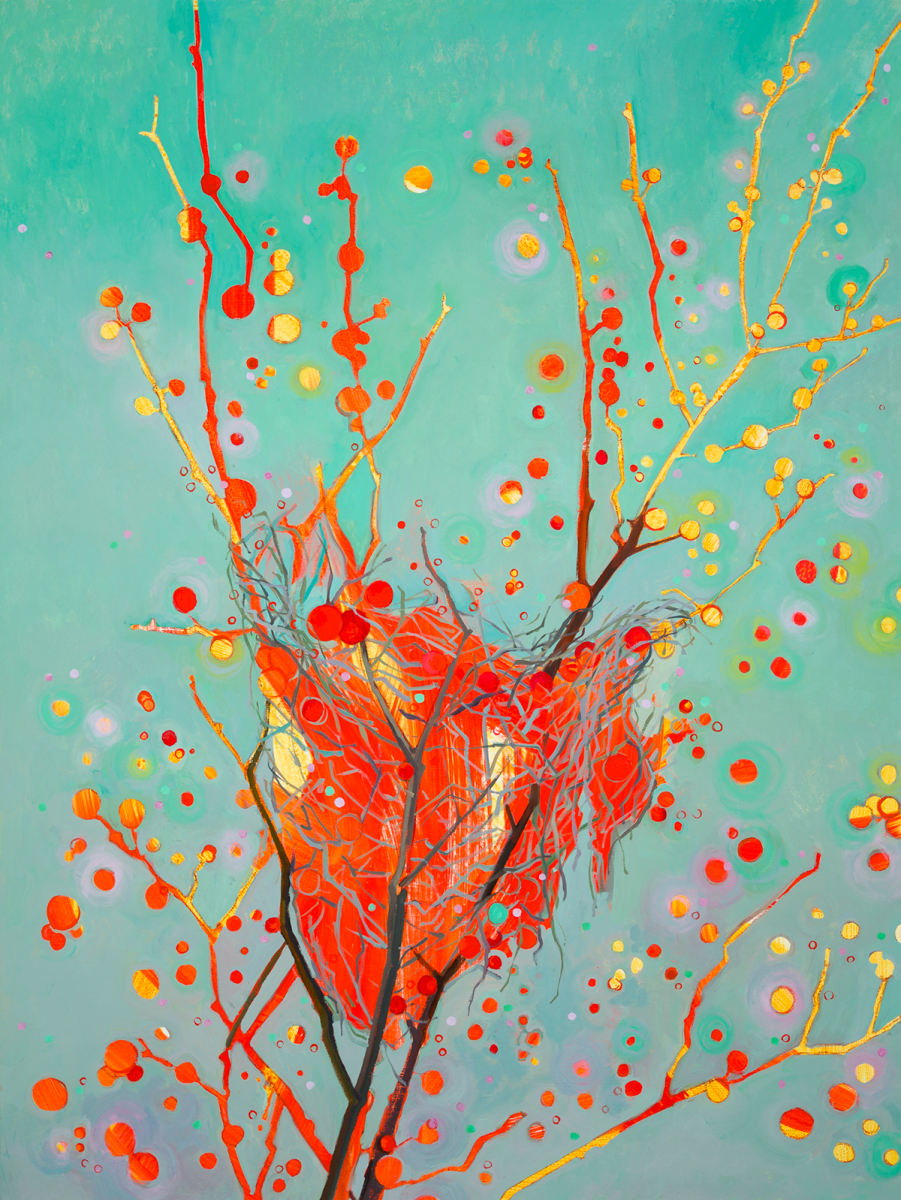 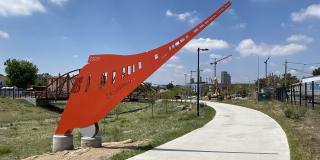