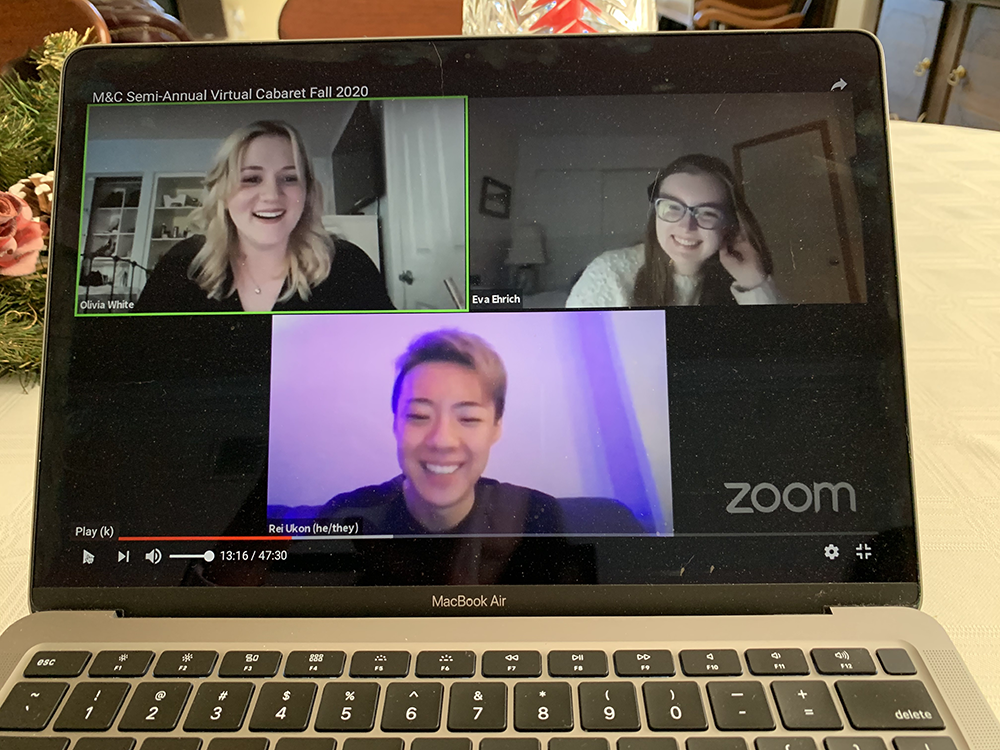 Broadway shows, live concerts, the movie industry — all are impacted by the sting of the pandemic, and artists are finding alternate ways of keeping the performing arts alive. Lehigh’s Mustard and Cheese (M&C) Drama Society, the second oldest drama club in the nation founded in 1884, is not letting social distancing and members taking classes remotely from home stand in its way. The 2020-21 executive board decided before the fall semester began that traditions would be upheld, adaptable programming would be pursued, and the show would virtually go on.

New this semester was M&C launching a member letter writing campaign in October to local high school students interested in theater. Club president Eliza Howard ’21, an integrated business and engineering major from Oceanport, N.J., reached out to the Civic Theatre of Allentown and the Lehigh Valley Charter High School for the Arts in Bethlehem to initiate the idea. Howard received a list of high school juniors and seniors in the local area interested in the arts.

“We wanted to encourage the students to continue the arts despite the virtual nature of the world and invite them to perform in our Virtual Cabaret in November,” said Howard, who lived off campus this fall and attended Lehigh classes online and in person as a hybrid student.

Started in the Fall 2018 semester by previous M&C President Jada Jackman ’20, the Cabaret is traditionally held each semester with open auditions kicking off the event in the Zoellner Arts Center’s Fowler Black Box Theatre. In-person rehearsals would follow in the weeks before the live performance in Zoellner’s Diamond Theater. The event gained popularity with individual performances spanning singing, dancing, monologues, improv, one-act performances, readings, and more. Because of the pandemic, the only way to continue the Cabaret was virtually.

“Our students understand that even during these COVID times, our need for connection, community and engagement is as important as ever,” said Kashi Johnson, chair of the department of theatre and faculty advisor to Mustard and Cheese. “M&C has always been a club with heart, and this semester’s letter writing campaign is just the latest example.”

Diane Wagner, director of theatre, Lehigh Valley Charter High School for the Arts, was excited to hear about the letter campaign and the offer made for her students to participate in the upcoming Cabaret.

“Since we were 100% virtual in the first quarter at Charter Arts, we were looking for ways to stay connected to our creative partners in the community,” Wagner said. “Our students are always eager to share their work, and this provides them with a venue and an opportunity to do that.” 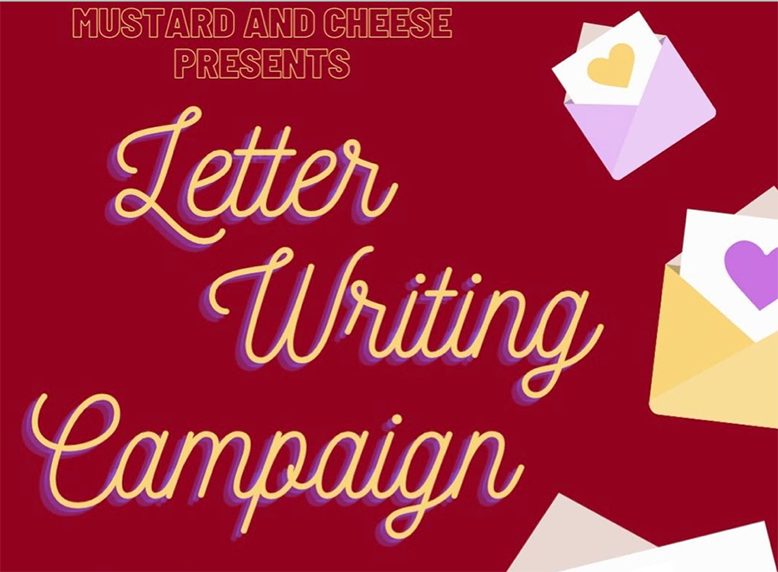 A mass mailing that included five hand-written letters and 45 emails was sent by M&C Secretary Dominique Ocampo ’22, an IDEAS major (Integrated Degree in Engineering, Arts and Sciences) with concentrations in mechanical engineering and theatre. Each communication included an invitation to submit information and a recorded performance to a Fall 2020 Virtual Cabaret audition Google form.

An excerpt from an M&C member’s letter said, “The theater has always been a huge part of my life, and it was not easy to adjust to the change of the arts during the quarantine. But I have seen so many wonderful new theater opportunities appear virtually, and theater will start coming back in person in the near future. I personally have been able to get involved in a bunch of virtual theater productions, and it has been so much fun!”

Putting the Show Together

All three of the Virtual Cabaret committee members were in different parts of the country and connected either virtually or digitally to review submissions and plan the show. Committee chair Eva Ehrich ’22, an economics and anthropology major, was taking Lehigh classes remotely from home in Seattle; Olivia White ’21, a marketing major was attending classes from home in Orange, Calif.; and Rei Ukon ’21, a marketing major from Mamaroneck, N.Y., was living off campus in Bethlehem and taking online classes.

The viewing platform planned for the show that aired November 14 was to stream a Zoom meeting to YouTube that included White emceeing the show live and introducing and playing the recorded performances. During the show, White encouraged viewers to share comments and virtual applause during the live chat that was monitored by Ehrich.

Other than a few technical difficulties that delayed the start of the program, everything went smoothly.

“Streaming a Zoom meeting to YouTube is no walk in the park. There are so many little things that have to be set and just right, and if something is out of order, nothing will work,” said White, who straightened out the issue within minutes. “As emcee, I also learned how there is so much more dead air going out since there is no true live audience to interact with, so it was important that I filled that dead air and kept talking. Finally, I learned just how much preparation goes into a virtual show.”

M&C’s first Virtual Cabaret included four performances by artists singing selections from “Hamilton,” “Mean Girls,” “Smash,” and “The Theory of Relativity.” There was also a ventriloquism act and a humorous monologue performed of Joseph Arnone’s “Crappy Pants” about a girl being on a date with the ‘hottest football player from Queens’ and she craps her pants.

“This is not my first time participating in a virtual performance, but it is my first time doing a pre-recorded performance with a live broadcast element,” said Juliana Kilgore ’24, a first-year student who plans to double major in theatre and environmental science. From Corona, C.A., Kilgore recorded singing “Caught in the Storm” from “Smash” on campus in Dravo House where she lived during the fall semester.

Jillian Petrie, a junior at Lehigh Valley Charter High School for the Arts performed “I’d Rather be Me” from “Mean Girls” that she recorded from her home in Alburtis, Pa.

“Knowing that Mustard and Cheese is a student-run club, and that they put this on by themselves, is so inspiring. During this time, it can be very hard to have the motivation to do things like this. But this is the time where we do need art. Art changes the world,” said Petrie. “I had a great time being a part of this experience and seeing the final project.”

Diane Donaher, managing director of Civic Theatre, said it was inspiring to work with Howard and the officers of Mustard and Cheese and that their offer to communicate with local students to bring hope, encouragement and a sense of community was truly a gift.

“It means so much knowing that someone who loves theatre as much as they do is cheering on others in the community to stay focused, keep dreaming, and continue training in their art,” said Donaher.

“We love showcasing the creativity of our students, and I am very excited to be able to include students from Bethlehem and Allentown, as well, in showcasing that creativity,” said Howard, who is looking forward to next semester’s programming, which will include another Virtual Cabaret.