Sonia Weimann’s life is coral-reef busy. She’s a doctoral candidate in Lehigh’s department of biological sciences who also balances family life, being a co-owner of a decorative painting/wallpapering business, and is a member of a rock ’n’ roll band. She specializes in studying sound from several perspectives starting at basic science in the mammalian auditory brainstem up to animal communication through vocalizations. Her study subject is currently the damselfish, one of the coral reef’s busiest residents.

A star of aquariums, damselfish are the focus of a novel study supervised by neuroscientist R. Michael Burger and lead by Weimann and four Lehigh colleagues. Accepted in January for publication by Bioacoustics, a leading journal of research about animal communication, it is the first analysis of vocalizations that demonstrate that damselfish adjust their vocalizations based on the identity of intruder species. Based on an experiment conducted in the Caribbean, it provides vital information about a valuable creature in an invaluable ecosystem threatened by storms, tourists and other predators. It also confirms Weimann as a collaborator combining neuroscience and vocalization behavior.

"I believe we have one life and it’s limited and we have to do something important—now."

Marine life has long been linked to Weimann’s life. Growing up in Rhode Island, she spent countless hours in and along the ocean, a “magical” place for observing all sorts of organisms. Her inland hangout was a store called the Fish Bowl, where she spent much of her newspaper-delivery money on guppies, angel fish and other staples for her 100-gallon aquarium. She insists that had she been able to afford a salt-water tank, she would have stocked it with damselfish, which are prized as pets for their neon colors, bright patterns and salty personalities.

Raised in a religious family, Weimann initially intended to be a minister. She changed her career course after receiving a bachelor’s degree in theology from Valley Forge University.

“I’ve always been inherently curious about everything,” she says. “I love logical thinking; I love critical thinking. Religion has a way of understanding the world without asking too many questions, and I’m not good with that. In science you must question everything and get answers that are measurable; it’s the basic way of understanding our world. To know nothing about that world would be a travesty.”

In 2005 Weimann began her new path as a biology major at Cedar Crest College. Her research subjects included a hormone that controls aggression in fish named after Jack Dempsey, the heavyweight champion boxer.  Dissecting frog vocalizations prepared her for dissecting the froggy croaks of damselfish.

Weimann graduated magna cum laude from Cedar Crest in 2009, the same year she entered Lehigh’s integrative-biology program. Her first research project at Lehigh was guided by Murray Itzkowitz, professor and department chair of biological sciences, who has studied damselfish for five decades. Itzkowitz’s research concentrates on how the quality of breeding sites affects courting and defending nests. An avid snorkeler, Weimann knew that damselfish formed a busy, beautiful blanket on the bottom of reefs. Itzkowitz and Burger had planned an acoustic study in the Caribbean examining damselfish vocalizations. Damselfish are an ideal study subject because they protect their turf aggressively and loudly, making sounds that are easily heard and recorded. 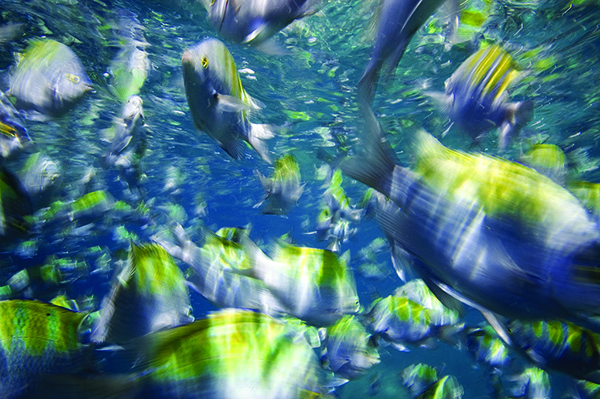 Guided by Itzkowitz and Burger, Weimann joined the project and set up a damselfish experiment in a shallow coral reef near an oceanographic institute in Holetown, Barbados. She established 10 tagging stations for dusky damselfish and longfin damselfish, which have different traits and overlapping habitats. She placed three intruders—duskies, longfins and slippery dick wrasses, nicknamed for their habit of stealing eggs—in clear plastic bottles. She then recorded vocal responses to the invaders over two-minute intervals.

The ocean was a reluctant partner, obscuring damselfish vocals with crashing waves, popping shrimp and other disruptive noises. “You would think that spending so much time in the Caribbean would be relaxing,” says Weimann. “Spend a few 12-hour days staring at fish and you’ll think otherwise.”

The results were well worth the sacrifice. Weimann discovered that duskies were the most vocal subjects, confirming their status as the chattier damselfish. The most common sound was a chirp. The most chirped-at intruder was the wrasse, the most foreign fish.

Weimann’s and her colleagues’ study is important for at least three reasons. One, it establishes that damselfish speak differently to different species. Two, it confirms that fish have a language, although it’s not as understandable as the languages of dolphins and whales. And, three, it provides new information about the behavior of essential creatures that eat algae that corrode coral reefs, thereby protecting havens for food, medicine and erosion control.

“Every animal has its place in the circle of life,” says Weimann. “When an animal is missing, something’s missing.”

Itzkowitz praises Weimann for expanding the collaboration between the two lab groups. As he points out, she worked from sun up to sun down in the sea and took a half-hour cab ride to find a replacement for a faulty microphone. “Sonia made the study her own,” he says. “She is really smart and really, really hard working.”

Sonia is completing her thesis work in the lab of Burger, associate professor of biological sciences. The Burger lab studies how animals translate acoustic cues to localize a sound source. Having already co-authored two published papers on amino acids that inhibit the auditory systems of birds, Burger is also advising Weimann’s dissertation on neurotransmitter receptors activated by nicotine, a strong modulator of neural activity.

Weimann’s role as an auditory neuroscientist dovetails with her role as the mother of a child born with profound hearing loss. Her work in the lab and the field has been strengthened by her work with her daughter’s surgeons, speech therapists and special-needs teachers. Scarlet, 5, hears with the aid of cochlear implants. She shares her mother’s love for fish, tending her own aquarium.

Weimann portrays the brain as a sort of neural coral reef. “It has to make amazing computations to make sense of all this sensory information that bombards us,” she says. “Essentially, we’re a brain in the jar.”

Weimann’s jar is overflowing. She supports herself by wallpapering and painting with her husband, Matthew, a third-grade teacher. She unwinds as the singing keyboardist in Ask Alice, a ’60s-‘70s rock cover band named after a Jefferson Airplane hit. Every now and then she runs a half-marathon for charity in a Wonder Woman costume, an entertaining sign of female empowerment for her daughter. She wears the outfit in a photo on the Web site of Burger’s lab, which, thanks to her crammed life, she routinely enters at 4:00 a.m. The caption identifies her as “Graduate Student/Superhero.”

Burger says he first acknowledged Weimann’s unique powers during an after-work drink with their spouses. “At one point I asked Sonia: ‘What do you exactly want to do with your career?’ She said: ‘I want to take over the world.’ That’s when I thought to myself: This is someone I want in my lab.”

Weimann remembers a more powerful answer to Burger’s question.  “I believe I told Mike: ‘World domination: I want to be the best at what I’m doing, or die trying.’ I believe we have one life and it’s limited and we have to do something important—now. It’s important for us to contribute in any way, even in a minor way, if it can save us as a species. You can always shoot for the stars, right?”