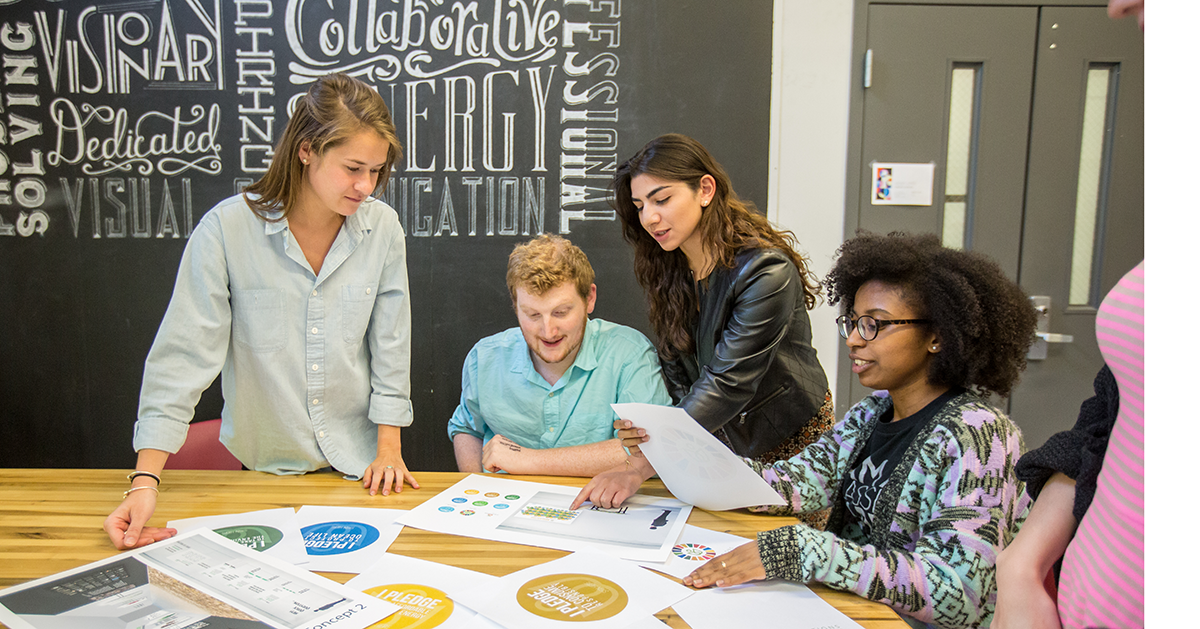 Justine Gaetano works in an advertising agency based in New York but her all-time favorite project was as a student in Lehigh’s Fusion Studio, a campus graphic arts agency.
“It was one of Fusion’s first big-name-clients, which made it exciting, but it was also purposeful work that seemed to have a big impact, even if it was in a small way,” she says.
Fusion’s assignment, for the United Nation’s Green Fair -- held to inspire UN employees to live more sustainably – was to generate fair attendance. “The studio spent weeks brainstorming how to transform one of the (UN) building’s hallways into a promotional piece for the fair,” Gaetano recalled. “We landed on an interactive pledge wall to drive engagement in an ever-expanding exhibit.”
Gaetano, ’16, who was Fusion’s creative director during a fifth-year presidential scholarship, delegated tasks based on student expertise.
“One team worked on the sticker design, quality, and logistics. Another worked on the visual display of the board itself. One of our senior designers focused on the flyer design and I was tasked with the original logomark, which they still use today.”
Three years later, despite the temporary closing of the Mountaintop studio space due to the pandemic, Fusion students continue their mission to do purposeful work.  “We try to help Lehigh as a whole,” explains Marilyn Jones, associate professor of design and Fusion faculty advisor, herself a graphic designer.
Instagram’s “Fusion in the Kitchen,” for example, highlights Jenny’s Kuali on Bethlehem’s south side and other eateries and provides recipes like banana muffins and homemade hot chocolate, illustrated, of course.
Fusion students, scattered throughout Bethlehem, knew that meals might be a challenge, so they decided to present choices and at the same time help local businesses, Jones says.
The hybrid student-run graphic arts agency and academic four-credit class in the Department of Art, Architecture and Design (AAD), took shape in 2007, when the President’s office learned that His Holiness the 14th Dalai Lama would offer lectures in Stabler Arena the following year. Jones, in her first semester of teaching, was asked if her graphic design students could create an exhibition around the visit’s events, including attractive packaging for a planned eight-DVD lecture set. The packaging was designed, but finances intervened, says Jones, and the project was never completed.
The silver lining, however, was the beginning of Lehigh’s student design agency. Through the years Fusion has collaborated with academic departments and offices, including theatre posters. The 100th anniversary of the Business Department was celebrated with a Fusion-produced timeline of business education, which is displayed in the Rauch Business Center. The 2016 “string theory” billboard connected with string the different groups on campus under the guidance, “We’re knot so different.” Fusion has refreshed the exterior of Lehigh’s “Fud Truk” with a playful rendering of founder Asa Packer and last year designed the exterior of the mobile “Simply Skewered.”
There have been times Jones has had to push back on requests to “hold a contest” to create a logo. “We have a curriculum,” she explained. “And design is not free.”
That design has value is a lesson she imparts to her 13-20 students each semester. Undeniably, they know the value of their work before they graduate.

Kate Morrell, ’19, a business and economics major now working as a senior human resources assistant at Amazon in New Haven, Conn., treasures the art exhibition poster she created for Karyn Olivier, AAD’s 2018 Horger Artist in Residence.
“For this project, I was responsible for taking various portrait photos of Karyn that were to be used for the poster and other various advertising materials in preparation for the opening night exhibition,” she says. “At the time, I was very nervous to take on this responsibility, since this project was one of my first Fusion projects ever. I was unsure how the photos would turn out, but our team used my photos to design a spectacular poster that was printed and posted all across campus.”
Although Fusion bills clients, (which allows for occasional pizza parties), Jones has learned that students are not as motivated by money as they are by gaining experience.
“The dilemma for students who are looking for jobs is that the employers want experience,” says Jones. “Fusion serves as a bridge. They are working with clients and get production experience. Students say that when showing their portfolios, they really can talk about them, including the technical aspects.”
According to Gaetano, Fusion set a standard by outlining exactly what she wanted to due post-graduation — work with startups and small businesses to achieve a brand voice through visual communication — although she did need the skill of “resiliency” to see her through early job applications.
“As far as technical skills go, having experience with client-interaction was a big plus. Once I began in my first role, I felt accustomed to the pace of project timelines, having regular communication with clients, and understanding how to translate a business’s goals through design and branding.”
As a Fusion designer, Jackie Thomas, ’19, collaborated closely with her peers to work on a variety of logos, posters and infographics, and as her leadership role grew, provided direction and educational design resources to Fusion members.
She is partial to a College of Business project, a 14-page booklet for prospective students. “Knowing that the booklet would be distributed to more than 500 prospective students made the stakes high, and the accomplishment of completing it even sweeter.”
Part of the learning curve is “digging the content out of the client,” Jones noted. “Learning design is one third interaction with the client, one third technical integrity (can it be produced?) and one third design.”
Jones came to Lehigh 13 years ago from a 30-year career as a designer, art director, and creative director of her own design firm, so she knows the field. “I tell my students, it all adds up, your general knowledge and skills. Students, when given the responsibility, step up. They like being in charge and take the initiative. It excited me watching the students take charge. There is a different level of potential than if I gave an assignment.”
Thomas, who is now a designer with a branding agency in Morristown, N.J,. says Fusion taught her lessons not found in a textbook.
“One of the most important of these that I have brought into my professional career and personal life is the ability to roll with the punches,” Thomas says. “Our projects during Fusion rarely went perfectly as planned – and how could they have? We were all just learning how to design, manage our time, and communicate in client relationships.
“But when we ran into roadblocks, we just kept moving forward and making it work. Whether one is pursuing a career in design or not, this type of perseverance and willingness to change course to achieve an ultimate goal is invaluable to any college graduate.”
-Wendy Greenberg