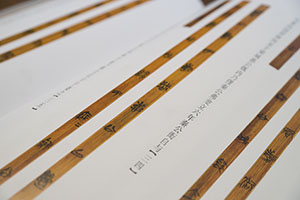 Five years ago, Tsinghua University in Beijing, China received a donation of nearly 2,500 bamboo strips. The strips probably originated from the illegal excavation of a tomb, and the donor had purchased them at a Hong Kong market. Tsinghua researchers carbon-dated the materials to around 305 BC, during the Warring States period before the unification of China, and from a few fragments of this collection of bamboo strips, Constance Cook, professor of Chinese in the department of modern languages and literatures, is piecing together the story of the birth of the Chu people.

Inspired by a Tsinghua text that purports to describe the birth of the Chu ancestral founder, Cook, in collaboration with a colleague at Beijing Normal University, examines the topic of miraculous births of ancestral founders.  This text, the “Chu Ju”, which otherwise is just a list of places and ancestral rulers’ names, begins with an extraordinary description of the traumatic—possible C-sectional—birth involving the female ancestor and a shaman with a thorn tool.  Curiously, “thorn” becomes the name of the people, Chu.

The co-author of the forthcoming book Birth in Ancient China, Cook examines differing cultural strands within ancient Chinese genealogy and mythology, as well as the framework of the meaning behind birthing myths. She deciphers the stories of women giving birth, examines divination records, the early idea of Dao as “mother,” and the stories surrounding the notion of birth, as well as ancient Chinese words for birth.

“In such a study, it is impossible to separate myth from history, she says. “We are searching between the lines preserved by male historians for hints of the female experience.”

The female experience of birth, while the subject of many late imperial Chinese medical texts, was rarely recorded in ancient Chinese texts. In a world concerned with preserving the patriarchy, histories recorded men generating sons, rarely mentioning the mother. However, social and political reproduction relied on control over female fertility. In antiquity this involved divination, sacrifices, prayer, medicine, and magic.

Cook’s research focuses on the Chu region in southern China, a regional state that rose as the once dominant Zhou house crumbled in the 8th century BCE. In the Tsinghua “Chu Ju” text, there were two types of births, smooth and difficult.  The primal ancestor “descended” from heaven to marry a Shang princess (the Shang people in the east were conquered by the Zhou from the west in the 11th century BCE). This princess smoothly gave birth to twins.  Smooth birthing was legendarily associated with the birth of the Zhou people. The Chu people, tapping into legends associated with Shang and southeastern peoples, split open their mothers’ bodies. This ancestress (post Shang princess and possibly associated with a mythical Chu ruler of early Zhou time) also gave birth to twins, the first coming out smoothly but the second requiring the aid of a shaman healer.  The mother returned to heaven and the Chu people began.

“There’s a clear cultural aspect to the early birthing stories,” says Cook. “After the Zhou fell, formerly marginalized peoples rose to power. The Chu creativity was a powerful influence over Han dynasty culture and the subsequent Chinese civilization. In some ways, these ancient stories reflected early cultural competitions. “